CompassionWe show care and consideration to everyone

RespectWe value everyone and everything

CommitmentWe set our goal and work hard to achieve this

SuccessWe are proud of ourselves and celebrate this

This half term, we have learned about the life of the Anglo-Saxons and were lucky enough to have an expert visit us! We dressed up as Anglo-Saxons and experienced what life was like for them.

We learned how to play a lute and tie our hair like a Saxon lady.

We drank from a drinking horn and tried traditional Saxon bread, which was delicious!

We ground corn to make flour - it took 1-2 hours to grind enough flour to make a loaf of bread. The grind stone was really heavy and it took at least 2 of us to move it!

When we tried on the Saxon armour and carried the weapons, we realised how heavy they were! William was our 'Thane' for the day - doesn't he look authentic! 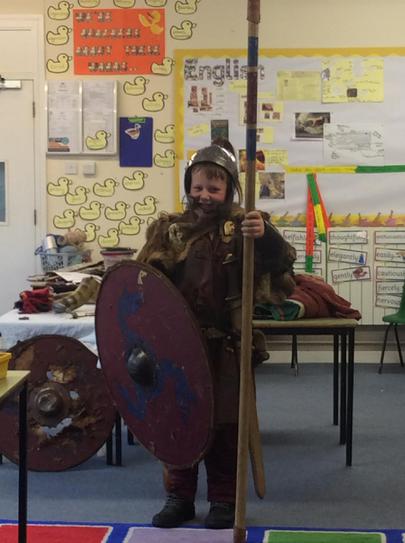 In the afternoon, we learned about Saxon combat techniques and worked together to make a Saxon shield wall to defeat our enemies.

We all had a brilliant day - thank-you so much to our parents who helped us to put brilliant costumes together!

Unfortunately not the ones with chocolate chips.

Some cookies are necessary in order to make this website function correctly. These are set by default and whilst you can block or delete them by changing your browser settings, some functionality such as being able to log in to the website will not work if you do this. The necessary cookies set on this website are as follows:

Cookies that are not necessary to make the website work, but which enable additional functionality, can also be set. By default these cookies are disabled, but you can choose to enable them below: